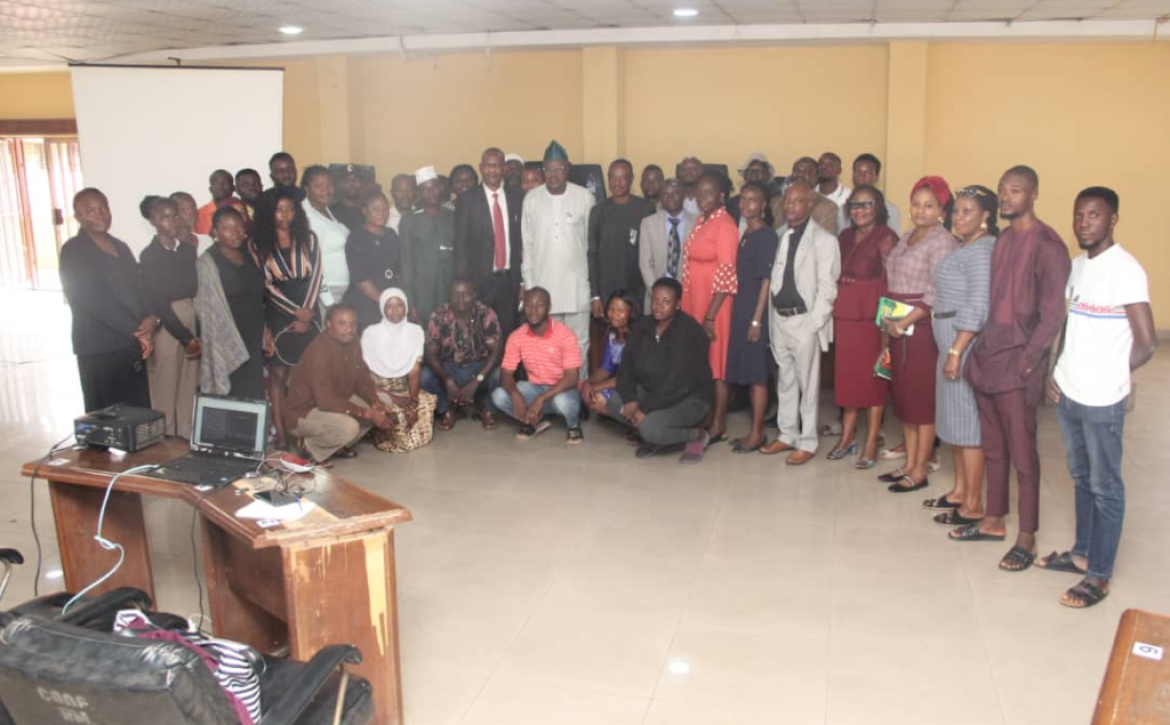 The National Bureau of Statistics (NBS) has begun a verification exercise of all Better Education Service for All (BESDA) focused centres in Oyo State.

Speaking at the flag-off of a 5-day training of NBS Enumerators in Ibadan today, the Executive Chairman, Oyo State Universal Basic Education Board, Dr. Nureni Aderemi Adeniran said the Board would collaborate with NBS to ensure a hitch-free exercise in the State.

Adeniran said his office, in partnership with office of the Statistician General of the State, would ensure the enumerators have unhindered access to the 21 BESDA focus Local Government Areas in the State, adding that this will assist the government in attaining its aim to eradicate Out-Of-School Children menace in the State.

“We assure the NBS management that the State Government, through the Board will accord the verification agents all the necessary support and information they may require”, he said.

Adeniran added that the State Government will ensure pupils in affected BESDA focus-schools stay back, despite the holidays, during the verification exercise, to ease the process.

“BESDA is a programme-for-result, funded by the World Bank to support increase in access to basic education by raising equitable access for Out-Of-School Children (OOSC), improve literacy and strengthen accountability for results in basic education in Nigeria. We are determined to make it work in Oyo State”, Adeniran said.

Adeniran noted that the State is ready for NBS visitation in the selected schools across the state, to verify the authenticity of records kept by the implementing schools.

He added that the Board will also provide data for the assessment of four Disbursement Linked Indicators (DLIs) on which the state would be rewarded.

“We welcome the NBS team and its Enumerators. This particular exercise, which is the second Phase, would be conducted in the 21 BESDA focus LGAs in our State”, he said.

Speaking earlier, the South-West Zonal Controller, NBS, Mr. Bayo Okunuga hinted that the trained enumerators, who are also referred to as NBS verification agents, would be deployed across various local governments to collect data.

He thanked the Oyo State Government for its commitment towards the success of BESDA and NBS’ verification in the State.

Also in attendance were the Statistician General of Oyo State, Mr. Adekunle Teslim Adejuwon; the Coordinating Director of OYOSUBEB, Mrs. Abosede Owoeye and other management team of the Board. 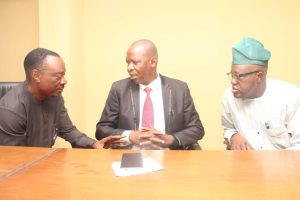 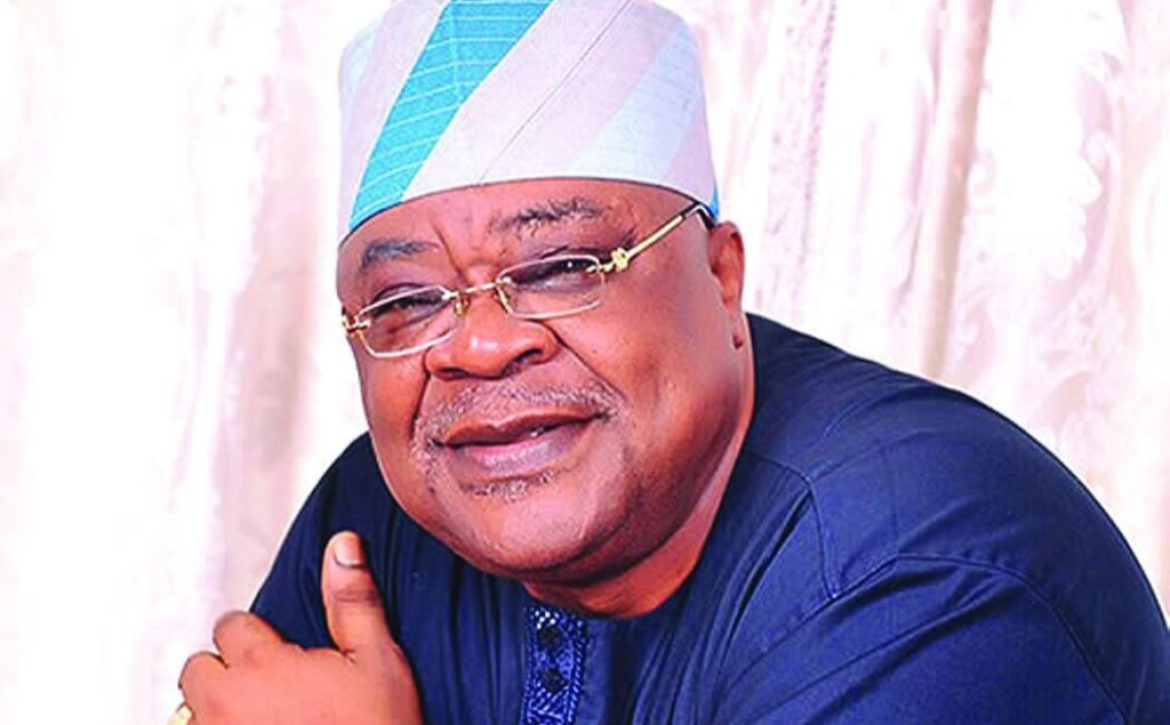 The OYOSUBEB helmsman recalls with nostalgia how his relationship with former Governor Alao-Akala started, during their heydays as Chairmen of Local Governments in the State.

“Chief Alao-Akala was a good brother, friend and leader to me. We both started as Local Government chairmen. He served as Chairman, Ogbomosho North, while I served as the Chairman, Ibadan South-West”.

Dr. Adeniran noted that thereafter, Chief Alao-Akala, who served as a Governor in the State, was a good leader to him, when he served under his PDP led Government.

The OYOSUBEB Boss added that the late Adebayo Alao-Akala was an uncommon patriot who contributed immensely to the development of politics in Oyo State.

“He was a leader and an uncommon patriot who understood the political terrain in Oyo State. His knowledge of Oyo politics was profound and remarkable”.

Adeniran said, “Former Governor Alao-Akala’s death is indeed a personal loss to me”. 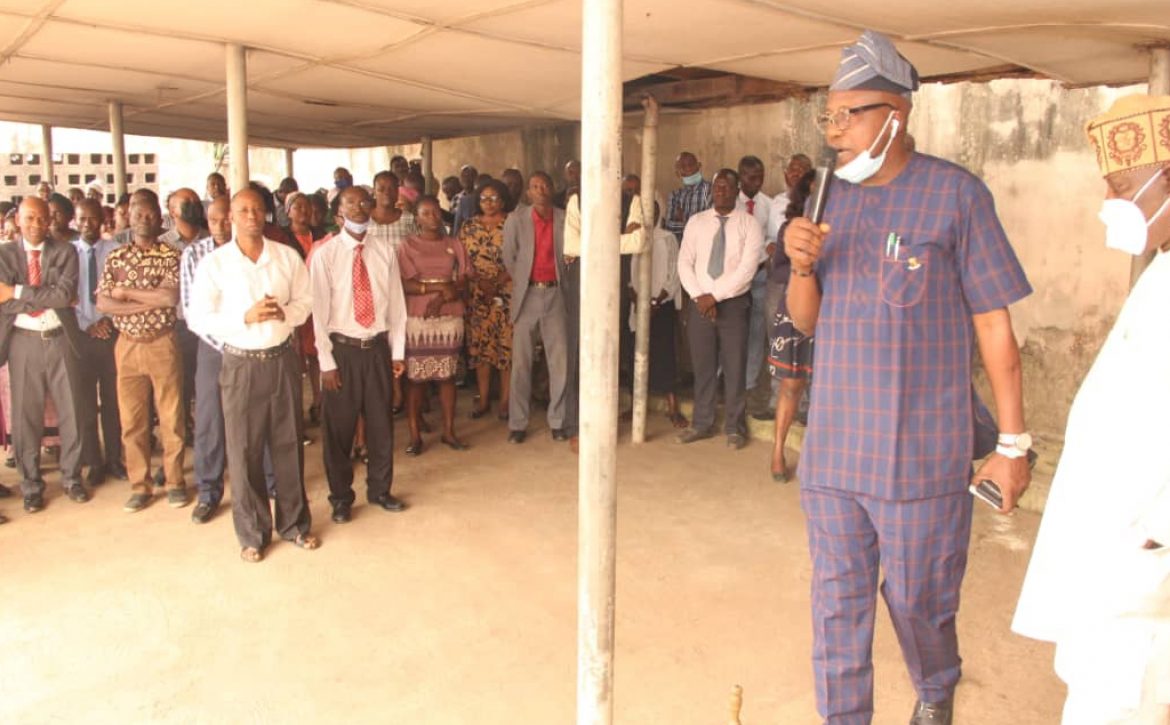 …Promises to further Prioritize Staff Welfare in the New Year

Oyo State Government has declared that all public schools in the State are to resume for the second term 2021/2022 academic session on Monday, January 10, 2022.

The Executive Chairman, Oyo State Universal Basic Education Board, Dr. Nureni Aderemi Adeniran made the announcement during a New-Year Prayer session with staff members of the Board on Tuesday.

He said the resumption date is approved by the Ministry of Education, Science and Technology, adding that the Board, in its usual practice, would monitor compliance across the State.

Adeniran therefore urged Parents to prepare all learners for resumption, adding that they are all expected back in school as academic activities start the same day.

While wishing students and teachers a happy resumption, Dr. Adeniran appealed to Head-teachers and all stakeholders to ensure strict compliance with all COVID-19 safety protocols put in place by the state.

Meanwhile, the OYOSUBEB Chairman has vowed that the welfare of staff members of the Board will remain top priority of the management of the Board this year.

Dr. Adeniran noted the Governor Seyi Makinde led administration believes workers deserve their pay on regular basis, adding that this has informed the Board’s decision to approve disbursement of loan forms to staff members of the Board.

According to him, the loan will be disbursed to beneficiaries, depending on their grade level.

The Executive Chairman of Oyo State Universal Basic Education Board, Dr. Nureni Aderemi Adeniran has clinched the ‘Exemplary Performance of the Year 2021’ Award at the Nigeria Union of Journalists Pen Night, which took place over the weekend in Ibadan, Oyo State.

A statement by the Board’s Media team, said that the award by NUJ was in recognition of Adeniran’s exceptional performance in developing the Basic Education sector in the State.

Speaking earlier, the Chairman, NUJ, Oyo Council, Comrade Ademola Babalola described Adeniran as a forthright administrator, whose acts of big heart has inked his name indelibly in the sands of time within the education system of Oyo State and Nigeria, at large.

He also praised Dr. Adeniran for the laudable work OYOSUBEB has been doing, which includes enrolment of out-of-school children; construction of Model School buildings; Renovation of schools; provision of basic facilities; and coordinating basic education in the State.

In his award acceptance speech, Dr. Adeniran lauded the Nigeria Union of Journalists and dedicated the award to his principal, Engr. Seyi Makinde, who he said gave him the enabling environment to operate at the Board.

“I want to thank NUJ for this award and I dedicate this award to God Almighty who gave me the courage and strength to perform at the Board I supervise. I also want to dedicate the award to my Principal, Engr. Seyi Makinde, who has given me and other appointees the enabling environment to perform in our various portfolios”, Adeniran said.

The Adult Education expert, who used the opportunity to also thank Board members and management team of the Board, noted that the present crop of leaders at OYOSUBEB would not rest until they ensure the basic education system is left better than the present administration met it.

He, however, promised to change the ugly trend of school children roaming the streets, adding that the ongoing Better Education Service Delivery for All programme is addressing this menace. 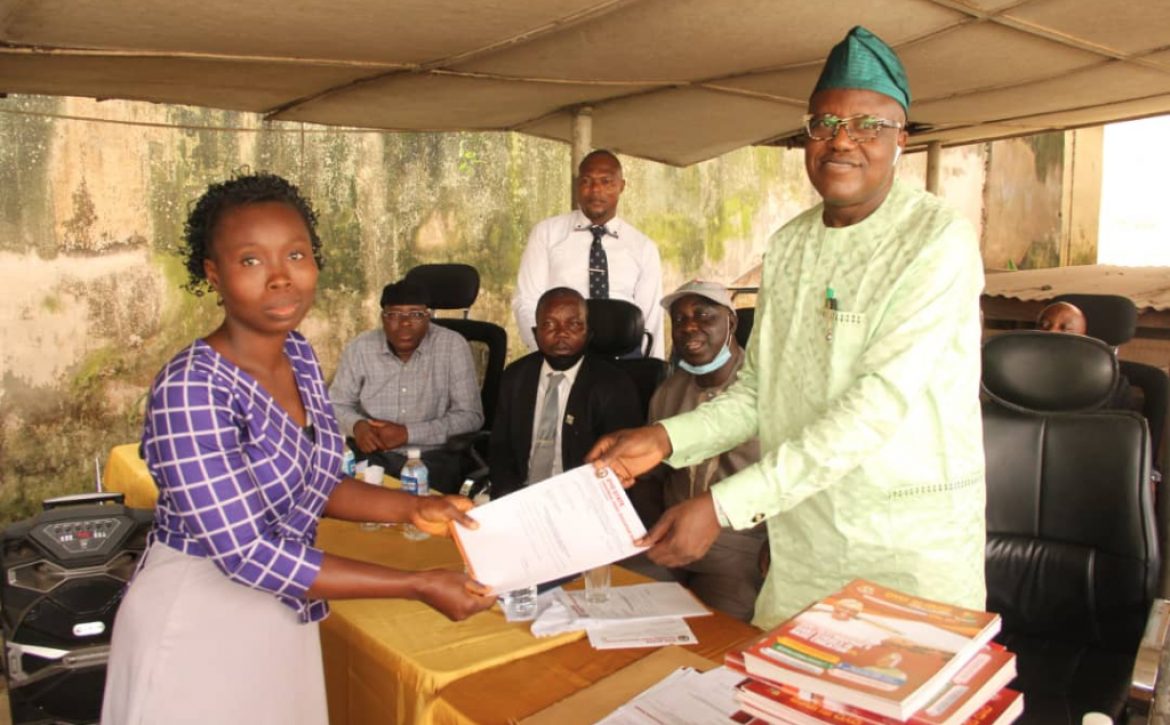 The Oyo State Government on Wednesday released the promotion of over 16,500 public primary school teachers across the 33 Local Government Areas (LGAs) of the state.

The Executive Chairman of the State Universal Basic Education Board (SUBEB), Dr. Nureni Adeniran, disclosed this during a symbolic presentation of the letters in Ibadan, the state capital.

Dr. Adeniran therefore charged the teachers to redouble their efforts, saying the State Government is committed and passionate about their welfare.

Adeniran, who told newsmen at the event that the teachers had spent some years without promotion before the present administration’s assumption of office in 2019, said that the teachers were promoted based on the instructions of Gov. Seyi Makinde.

Dr. Adeniran who affirmed that the promotion exercise is part of efforts by the present Government to boost education in the State.

“When Governor Makinde assumed office, he promised to give priority to education and today, we have adopted measures to improve the standard of education in the state”, he said.

Dr. Adeniran commended the foresight of Governor Seyi Makinde and his political will to transform the education sector in the state.

“Today, this Government has approved and commenced distribution of promotion letters to over 16,500 public primary teachers in the State”.

“The welfare of teachers is taken very seriously by the Gov. Seyi Makinde-led administration, salaries of teachers are paid as at when due.

Adeniran, who noted that the Government is aware that recruitment of teachers would address the problems of inadequate manpower in the basic education sub-sector and promote teaching and learning, urged stakeholders to exercise more patience.

He stressed that soon, after resolving some bottlenecks, the Oyo state Government will employ primary school teachers with professional teaching qualifications, based on merit.

In their separate remarks, the Chairman, Nigeria Union of Teachers, (NUT) Oyo State chapter and the Chairman, Association of Primary School Head-teachers of Nigeria (AOPSHON), Comrade Toju Adedoyin and Comrade Kunle Adedeji commended the State Government for the promotion of teachers in the State.

They said that the promotion would boost the morale of teachers in the State, adding that it will promote teaching and learning.